Should bikes be allowed on the Sydney Metro?

I went to an info session run by Sydney Metro on Saturday in Balmain Town Hall. One of the Metro planners said they don't want to carry bikes on the new Metro trains (if it ever gets built). Reasons given were "bikes might get caught in the automatic gates" and "passengers might get grease on their clothes".

Anyone know if they take bikes on the Paris Metro or other Metros?

They will take strollers and wheel chairs and luggage so I dont agree that it would be a problem that couldnt be designed for. They could direct cyclists to enter by the rear door for instance, to minimise problems, as most passengers use the middle doors.

Looks like we are getting the same model as Amsterdam:

These look similar to, but different from those I use when working in Auckland, and also used in Copenhagen. One of the main benefits of the single decker is the ease of access - lots of doors and no "congestion" waiting for people to go up or down the stairs. There is no shortage of space to store bikes on the Auckland trains, in fact there are carriages marked for bikes that have fold up seats and three straps to secure bikes. However these carriages also have the same fold up seats for up to three mobility passengers (i.e. wheelchair users) and it's highly unlikely you'd have three at the one time, so people also store their bikes there (although I don't think they have the straps.

The last time I was in Auckland 3 of the 6 passengers in my carriage were transporting bikes! And there was no issue, although I could imagine it would be more so on a busy service, just like it is on any busy train service where some passengers have additional luggage be it a bike or suitcase etc (try the airport line on a double decker, where those with big suitcases are constrained to the vestibules).

On the subject of carriage width (page 4) -

The METRO cars will be 2600 between the doors.

Understand that Auckland has gone electric, the train you caught was it the new electric trains?

Here is how they do it in NZ. The center carriage on the metro train has a space where the seats fold up to make room for bikes

That'd be Auckland - in fact I was literally sitting across from the bike storage area as in G&M's photo when I saw the post! Wellington also has commuter trains although I'm not as familiar with them - will let you know when I get back from there at Christmas.

Mike in reply to your previous comment about the Auckland trains, yes the new ones are electric. And they're fantastic, at least in my personal experience. They're quiet, frequent (every 10 mins in peak), cheap ($3 each way with a "hop card" i.e. Opal), on time, clean... I travel against the traffic so mine are usually quite empty, but coming in to the city in the morning they're packed. Auckland is growing faster than the roads can bloat to accommodate more cars parking, so it's encouraging to see people becoming part of the solution rather than the problem. About the only downside is they don't service all of the city, for example there's no rail crossing over to the north shore (geographically Sydney and Auckland are somewhat similar) but there is a "bus line" down the main highway and across the bridge. I stay in the city and have a 500-600m walk to & from the station at each end, and a 17 min / 4 stop journey in between. With petrol pushing ~$1.80/l over here, $3 on the train is cheaper than the petrol on a 15km each-way drive. Let alone all the other benefits.

In Sydney I frequently have conversations with colleagues about how I catch the train to the airport, because (even with the $12.50 station access fee - hardly admission to an art gallery!) it's about $100 cheaper than a cab. They look at me in disgust and say "but you have to sit with the great unwashed" until I ask them what they're heading to the airport for - to spend the next however many hours sitting in a similar metal tube cheek by jowl next to...

They have Uber bikes there already!

Actually I have to admit how impressed I have been with the bike infrastructure over here - so much more than just paint. There is a new off-road path about 50m from my hotel (separated from the footpath too, not that the pedestrians seem to notice, but then nor have I seen any problems), which links up to a separated path, which leads to a off-road path up a gully alongside the motorway, which joins up with some other paths that distribute you across the city. Basically I can do about the first 2.5km of my commute out of the city before I even have to start being separated from traffic by anything more than paint.

I'm also quite keen to go and ride the newly opened "Te Ara I Whiti" (translation: the way over) bike path, which is a converted motorway off-ramp that links the 9km northwestern bike path right in to the city: 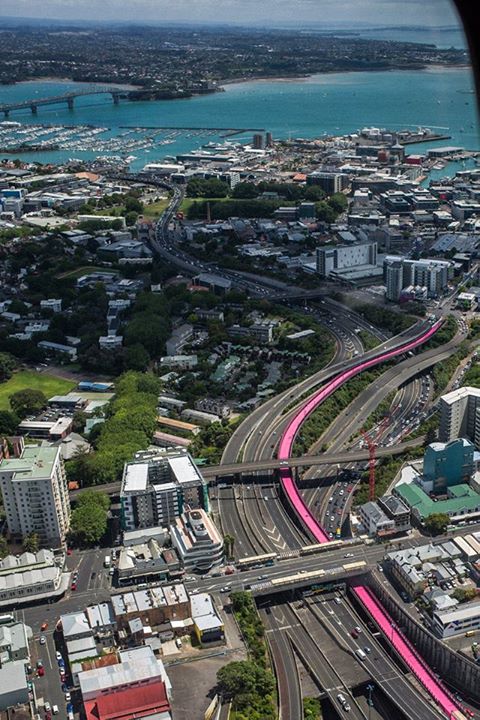 As one comment I read said, you can now match your lipstick to your bike path!