The Daily Telecrap published (on March 15) more garbage from the sister of our former-great-cyclist-leader Tony Abbott, failed Lord Mayoral candidate Christine Forster, about how cyclists and flowers are making parking cars just sooo difficult in Sydney.

Because it's apparently a "Premium" article in the Crapper, some may not be able to read her bollocks. Being the generous soul that I am, and somehow having been granted access, I have stolen from the rich Murdochs to give to the poor Sydney Cyclists. Enjoy.

(Oh, my favourite bits are the photo caption saying that integrating parking will result in "beatification" of Saintly Sydney, and the bit about ignoring the complaints of a whole 8% of residents. Also the bit about every time Clover sends out the cycleway builders a car park is lost, never to return, accompanied by a picture of construction of the now ripped-out College St cycleway.) City of Sydney Liberal councillor Christine Forster says more needs to be done to integrate car parking and beatification of the city.

FOR a Lord Mayor who prides herself on her environmental credentials, Clover Moore has a sorry track record of failing to value and conserve one of inner city Sydney’s scarcest and most precious non-renewable resources: on-street parking.

For example, in Surry Hills, the City of Sydney Council is spending a considerable sum of ratepayers’ hard-earned cash on a project to widen and include garden beds in the footpath on the north side of busy Foveaux St. Council claims the project will ­improve pedestrian access and make the street more visually appealing.

The bike lanes come at the cost of parking in the Sydney CBD.

Now, everyone wants our footpaths to be as accessible and attractive as possible. And most would agree that shrubberies and hedges soften and improve the look of our sometimes gritty inner city streetscapes.

But the problem is, a great many of the people who live in the inner city need to own cars, and mostly the ­people who come to do business here, such as tradesmen and delivery drivers, arrive in vehicles. But unlike the Lord Mayor, who has a ratepayer-funded chauffeur, all those people need to park on the street.

That is a need the Lord Mayor dismisses with a wave of her hand each time she ­approves a street scaping project like the one in Foveaux St, which resulted in the loss of four parking spaces. She dismisses it when she rubber stamps bicycle lanes, which had obliterated 660 parking spaces up until mid-2015 and at least 40 more since.

Every time Ms Moore sends in the construction workers, another car space seems to disappear — never to return.

She will no doubt dismiss it again when she approves the Burren and Wilson St cycleway in Newtown, ­despite the protests of 306 or 8 per cent of the local residents surveyed.

The reality is that once on-street parking is lost to a garden bed or a bike lane, it is gone forever. That’s why I have repeatedly called on the Lord Mayor to do what is right and design our streetscape improvements and bicycle infrastructure with a view to preserving and protecting the on-street parking that we all need in order to have a functioning city.

Instead, the Lord Mayor’s cavalier attitude results in projects that nibble away at our parking stock. Each time a kerbside bicycle rack or a corner garden bed is installed, the residents and businesses of the city lose the space that enables them to park their cars or load and receive deliveries.

It is possible, with some careful planning, to achieve both beautiful and functional streets and kerbsides.

We just need the Lord Mayor to start caring enough to stop waving goodbye to the parking spaces that Sydney can never get back.

Christine Forster is a City of Sydney councillor.

Brilliant. My favourite line has to be:

If this is real, which I struggle to believe, it reads like a string of Bob Gunderson tweets. My only sadness is it appears to be missing my favourite cliche that "not everybody can <ride a bike/walk/catch a train>" as if everyone can drive a car.

FOR a Lord Mayor who prides herself on her environmental credentials, Clover Moore has a sorry track record of failing to value and conserve one of inner city Sydney’s scarcest and most precious non-renewable resources: on-street parking.

This is priceless!  I guess in a world where "clean coal" can be funded by the Clean Energy Finance Corporation, then why not see on-street parking as something that should be protected in order to bolster environmental credentials...

So she is saying that 700 parking spots have been removed from the CBD due to the bike lanes and at the same time talks about other reasons for the loss of parking and other driving facilities, one photo appears to be the light rail project.

In fact the opposite is happening as there is less need to drive into the city due to improved cycling safety, the end result is that way more than 700 commutes have been moved to bicycles so that will mean that its actually easier to get a parking spot than it was before

one photo appears to be the light rail project

Nah, the one with the construction workers is surely College St outside St Marys Cathedral with Hyde Park on the left, when the cycleway was under construction.

That's why claiming the parking is never to be returned is so ironic, given that cycleway's been torn out again.

the ­people who come to do business here, such as tradesmen and delivery drivers, arrive in vehicles. ..., all those people need to park on the street.

Actually they don't, there is plenty of "off street" parking which they can use, which is under-utilised at the moment.

But the problem is, a great many of the people who live in the inner city need to own cars,

Actually people in the inner city don't need to own cars, they choose to own cars.

and mostly the ­people who come to do business here, such as tradesmen and delivery drivers, arrive in vehicles

So the solution here is to only allow tradesmen and delivery drivers access to the city - for everyone else, they can catch public transport, walk, or ride a bike.

Can someone explain to failed candidate Christine what "democracy" means?

Public space given over to cars 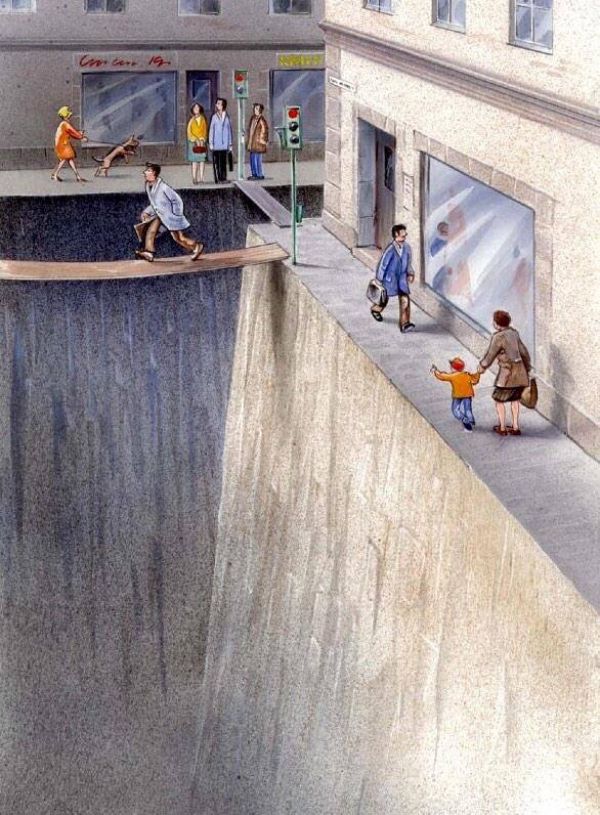 Tradesman and delivery drivers park in the cycleways anyway. Actually they park wherever they damn well please.

Well, obviously the ability to live in a parallel universe while appearing to be one of us, runs in the Abbott family genetics. This is also apt*. I hope CoS is working on cycleway designs that manage to incrementally eat car parking spaces, as well as more car-share spots and electric car recharge zones.

It seems to that the demand for motorcycle parking means that some more car spots should go for that too.