What is a Bike Lane?

After the comments down in Victoria there has been a bit of discussion on this issue on here and social media. Last year as part of my job I fielded a question from a lawyer seeking clarification after a cycling course about the different types of cycling infrastructure and what they actually mean. I think my response was fairly comprehensive, so here it is:

The NSW government has set up a website dedicated to information about cycling in NSW. This includes a summary of the key elements of the law which apply to cyclists.

On this page you will note the following:

This statement is a summary of Rule 247 of the NSW Road Rules 2008, which says the following

“(1) The rider of a bicycle riding on a length of road with a bicycle lane designed for bicycles travelling in the same direction as the rider must ride in the bicycle lane unless it is impracticable to do so.”

The definition of the term “bicycle lane” is established in Rule 153, which states:

(a) beginning at a bicycle lane sign applying to the lane, and

(b) ending at the nearest of the following:

(i) an end bicycle lane sign applying to the lane,

(ii) an intersection (unless the lane is at the unbroken side of the continuing road at a T-Intersection or continued across the intersection by broken lines),

iii) if the road ends at a dead end—the end of the road.”

Bicycle lanes are actually quite rare. There are only a handful in the City of Sydney area. The contra-flow lane on Wilson St has one.

The NSW Road Rules 2008 also contains definitions for two other types of bicycle-related infrastructure. The first type, a “bicycle path” is defined in Rule 239. The separated cycleways in the city are considered bicycle paths, as are sections of path where cyclists and pedestrians are allocated separate areas of use, such as on the Bay Run around Iron Cove. The signs for these bicycle paths, using the image of the bicycle and the word “only” separated from the image of the pedestrian and the word “only”, as well as the painted symbol of the bicycle and the word “only” on the ground, can be seen in the following two images.

The Bay Run (sign in the top right corner):

CoS separated cycleway (here painted on the ground): Many people believe that the western side of the Sydney Harbour Bridge is a bicycle lane, but it is actually just a bicycle path as there is no bicycle lane sign there. Saying that, it is a de facto bicycle lane and you are required to use it when crossing the bridge as there is a specific road regulation (Regulation 51) which prohibits cyclists from using the road over the bridge. Interestingly, that Regulation refers to a "cycleway" which is not a term which is defined within the road rules or regulations that I can find!

The second type, a “shared path” is defined in Rule 242. These are areas where space is shared between pedestrians and cyclists without the separation which is found on a bicycle path. The sign for these areas shows a symbol for a pedestrian on top of a symbol of a bicycle, you can see it here at the entrance to the shared path over the ANZAC bridge:

The City of Sydney has also been using blue painted symbols to signify shared paths: 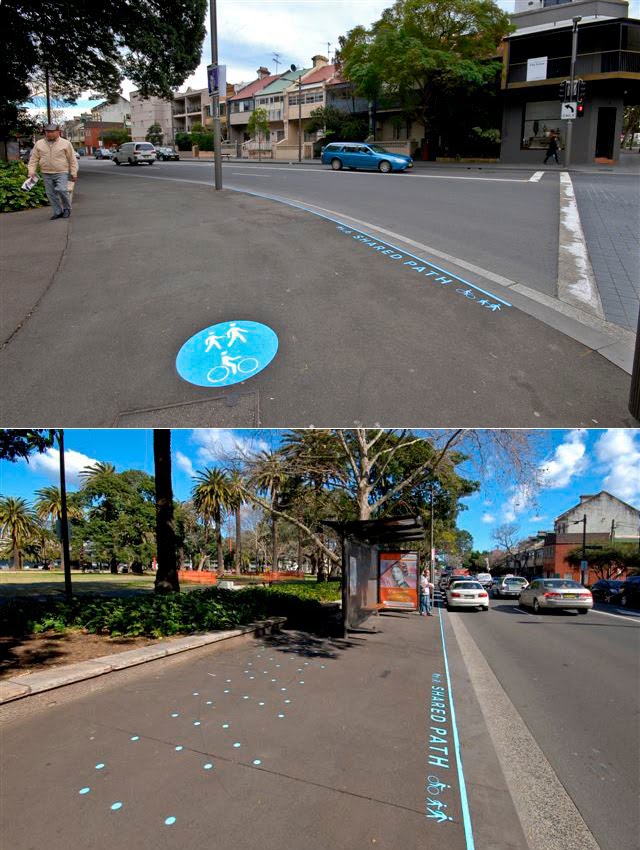 Unlike bicycle lanes, none of the sections of the Road Rules 2008 pertaining to bicycle paths or shared paths stipulate that their use is mandatory for cyclists. That means wherever a bicycle path or a shared path runs alongside a road a cyclist may legally chose to ride on the road instead (with the exception of the Sydney Harbour Bridge, as mentioned).

Finally, there is the lone bicycle symbol painted on the road. Sometimes this is in the shoulder, and it is called a bicycle shoulder lane (which is not necessarily a bicycle lane as per the definition above), in the car door zone or, increasingly, the centre of the lane. This symbol is not mentioned anywhere in the NSW Road Rules 2008. This symbol does not designate either a bicycle lane nor a bicycle path, rather it indicates that the road is part of a "bicycle route". The definition for a bicycle route can be found on page 7 or the NSW Bicycle Guidelines (which contains a whole lot of technical information about all types of cycling infrastructure and signage):

"Bicycle route – any marked route which forms part of a bicycle network. The route may utilise different types of bicycle facilities and may be on-road (bicycle lanes and bicycle shoulder lanes), or off-road (bicycle paths, separated paths and shared paths) in the road related area paralleling roads or
through parks and reserves."

So, a bicycle route is simply a recommended route for cyclists to follow, it can involve different types of infrastructure, but they can and do also include regular roads. When the bicycle symbol is painted on the road, be it in the centre of the lane or the shoulder, and neither a bicycle lane or bicycle path regulatory sign is present, the road is for all intents and purposes no different to any other road a cyclist may chose to ride on.

It isn't surprising that hardly anyone actually understands any of this.

Last time I checked the road rules shared paths could be designated with the iconography of the walking person and bicycle was present on the ground, without a particular iconography specified.

Yes, that is included within Rule 242 - it can be either a sign or a road marking, but the iconography is the same, a pedestrian above a bicycle.

There is a small section (about 50m) of Bike lane on North Rocks road as you travel south towards Parramatta. Its on the steepest section of the decline just prior to North Rocks Road going under James Ruse Drive.

I've always wondered what the point of it is i'm always going at or near the speed limit down there anyways, there is often cars parked in it and occasionally, when the traffic backs up from the Church st intersection, cars will stop to wait the lights in it. Both of these would be offences by my understanding of 153 and 158.

Permalink Reply by BernIe on March 20, 2014 at 4:59pm
Interestingly, when first introduced the "cycle lane" was much longer and extended all the way down to the industrial area at the bottom of the hill. This area includes car repair type places who use the road as parking overflow for their business. Obviously, the longer cycle way didn't last long and was progressively cut back (my guess would be due to complaints from the business owners) which is a shame as it was actually almost useful ... Assuming people obeyed the law and refrained from parking there ... Which they didn't.

Today it's just a complete nuisance. It takes less than 6 seconds to travel the length of the entire cyclelane and it's presence forces the cyclist to surrender primary position on the road, only to have to merge back into the lane 5 sends later at the bottom of the hill travelling at 50-60km per hour(assuming the cycle lane is actually devoid of cars which it often isn't).

As pointed out, it is very easy to travel at the speed limit (but not as fast as many cars who break the speed limit down there) and the lane would be far more use on the uphill journey which also contains squeeze points due to parked cars. These cars on the uphill journey are far more difficult to pass safely due to the large speed differential between the cyclist and motorised traffic. Of course ther is no cycle lane on that side as it would interfere with a residents right to leave private property parked indefinitely on public land.

From your description I don't think it would be an offence, actually, thanks to the "as long as it is practicable" clause.

Unfortunately, bogans tend to disagree. I've been undertaken at high speed down there by a SUV who then moved right forcing me into oncoming traffic. Had another situation where  woman overtook me then braked sharply got out and abused me. Also had people pull up at the lights, at the bottom of the hill, and abuse me for not riding in the cycle lane as well as quite a few scary tailgating s by trucks and cars.

The fact that I'm easily travelling at or near the speed limit makes no difference as they all want to drive 70 or 80 down there.

Thanks. It's a ridiculous mess isn't it?

The TL;DR: there are hardly any official bike lanes in Sydney. In almost all cases the existence of a white line and bicycle symbol do NOT mean it is officially a bike lane. There has to be a start and end sign, and there almost never is.

There's a few in the area around Bondi Junction, Queens Park and Charing Cross that appear to carry the regulation signage (or close to it). Bourke Stree, Queens park Road and Victoria St are examples.

Not saying they are any good mind you, they are all in the door zone.

The one on Queens Park Road is particularly nasty in the down hill direction. It keeps riders at the far left of the road approaching the roundabout. Most cyclists want to go straight on (to Centennial Park).

So the infrastructure sets them up for a massive left hook, when they really should be directed into the centre of the lane.

One of my faves, on The Crescent in Annandale. Bike lane is about 30 m long  on a left hand bend and ends up the back of parked cars. ( The End sign is slightly obscured under the Bike Lane sign) 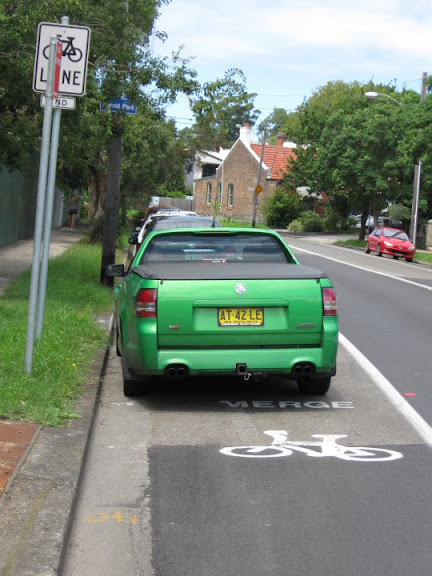 That merge sign, located under the wheels of a car, is quite prophetic.

My favourite is this one, downhill, in Francis Rd, Artarmon. It has all the essential elements: Start and end "bike lane" signs, extreme narrowness, closeness to car doors, cars parked overlapping it, discontinuity at every speed hump and intersection, lots of "Merge" signs painted, garbage bins left in it for collection ...

A triumph of bicycle provision!

Of course, to treat the street sensibly, just an uphill lane should be provided at twice the width (there is one the same width with similar problems, of course). This could easily be achieved except that the speed-hump-pedestrian-crossing/refuge half-way along would have to be modified. Too expensive!

Get in touch with your local council and request for them to remove the sign. I have successfully done that in the past. There is no way that that should be a bicycle lane.