A bit too ambitious 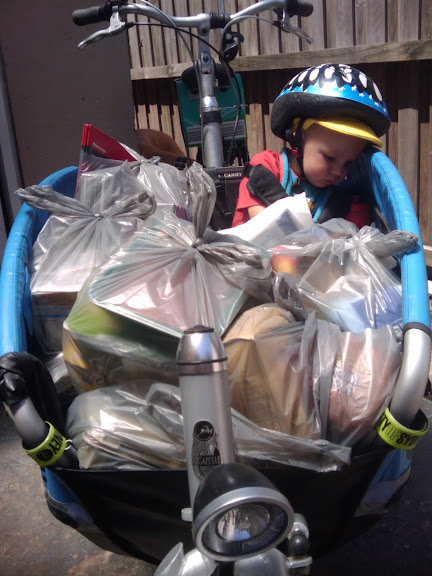 This morning my Little Mate and I went to Marrickville Metro to stock up on groceries for the holiday period.  I crammed an overloaded shopping trolleys worth of groceries into the Cabby (using the cargo bit on the front and the back rack). On the way home I put my foot down to go uphill over the railway tracks and I snapped my…

No bike. Because I walked here. Otherwise I’ll be rushing past (hint). So, that was Christmas on the road

Yes, I guess I was being over optimistic expecting to see anyone on the road yesterday morning.

Still, I confirmed previous research into my theory that cycling on Christmas morning is unpopular because all the coffee shops are closed. (Well, the ones on the north side, certainly. Nick and Nomes seem to be trying to disprove my theory on the… Enjoyed a lovely quiet ride to La Perouse along to Watson's Bay with Nick and Adrian this morning followed by a tasty coffee at Hernandez (it never closes!). Perfect way to start Christmas if you ask me!

Getting the Xmas prawns... Christmas. A time of good cheer, families, gifts, food and unbelievable traffic congestion. Or at least, this last item was evident this morning when I went to the fish market to pick up our Christmas seafood. Cars everywhere, cops directing traffic, chaos in the car park. Really, why do people put themselves through this?…

Last weekend my son and I did some riding in the beautiful bush of the Blue Mountains National Park. The short story is that we rode the Andersons fire trail on Saturday and the Oaks fire trail on Sunday.

The slightly longer story is:

* On Saturday we caught the train from Sydney to Wentworth Falls,

* rode back up Tablelands Rd and…

Merry Christmas all at Sydney Cyclist.

Home you all have a happy and safe festive season with some great riding.

This is Georgie, my daughter's dog. He also, if a bit reluctantly, wishes you all a Merry Christmas. 'Yellow card' magnet for cyclists to slap on cars via Gizmodo.

"If I saw this on my car, I’d definitely try to be more cautious of cyclists while driving. Well, unless that stupid cyclist was a complete tool bag that was hogging up the entire road. There’s a friggin’ bike lane for a reason you idiot! Then, it’d just infuriate me."

Check out some of those…

My own Sydney Cyclist Blog page ! - and MOMENTUM

I had no idea that I had a blog page at Sydney Cyclist until I happened to run across it today via a Google search that turned up some messages back and forth from last year.

Well, since you have given me this forum, let me encourage you to have a look at the new, much improved MOMENTUM magazine website at:… The other day, when leaving work at some ridiculously late hour, I got about a hundred metres down the road and realised that I had a puncture. I was riding the Peugeot, and it has brand new tyres on it. 'Bombproof' is how they were described by the shop. Well, either I have a problem with those rims or Panaracer tyres are not all they are cracked up to be; I've done nearly…

Announcing the delivery of Daisy, a younger sibling for Bluebell and Layla.

Daisy was delivered on Friday at Universe Cycles- the amount of effort Gary put into getting things just right was fantastic. Photos will be posted as soon as I work out how to get them from Mr Jen's new camera.

Daisy is a new (but old- Universe have some lovely brand new old bikes and frames are new in the box) lemon coloured Apollo step through frame, but with the new Shimano 11 Alfine hub fitted.

It's funny what motivates a ride sometimes.

Today I noticed a listing of a "Lane Cove to North Head loop" under SC's "Latest Bikely Routes" . As is too often the case with Bikely routes it seemed to take busy roads much of the way. (Why do people bother? -- like, as if we didn't know a main road will get you there?).

It does remind me, though, that I had told myself I should ride to North Head and get some photographs one day. Of course, the time I needed to go… There were a few obstacles, but nothing we couldn't get around, as I rode from Yarrawonga to Marysville with a few (4500) of my mates: I left work very late today, and when I came to hop on the bike outside the office, I discovered one of the rear lights wasn't working. Aaarg! Batteries? Of course, I have a spare set in my bag, so switch them over. Nope, still no joy - seems the light is dead. I had a nasty feeling about this light after I last used it - which was a long ride in torrential rain. It wouldn't switch off properly, and it seems it no will no longer switch on again.

Why do bike lights cope so… Continue

Morning, How is everyone enjoying Clover Moore's Kent Street Cycle Way through the city? Yesterday, I bought new cycling shoes. I’ve been needing a new pair for a while; I always know when my shoes are wearing out as my right knee starts to ache sometimes on longer rides. But actually that wasn’t what tipped me over the edge; what really did that was the smell.

We’ve had a lot of wet weather recently, and my old shoes stank. Really really stank. I had them under my desk at work, and it smelled like a tom-cat had pissed on the…
Continue

Tree-Cycle – The Recycled Christmas Tree of The Rocks

Has anyone seen this yet? Looks awesome - now this would be something different for the home front lawn decorations;) More pictures and description at: http://www.odditycentral.com/pics/tree-cycle-the-recycled-christmas-tree-of-the-rocks.html